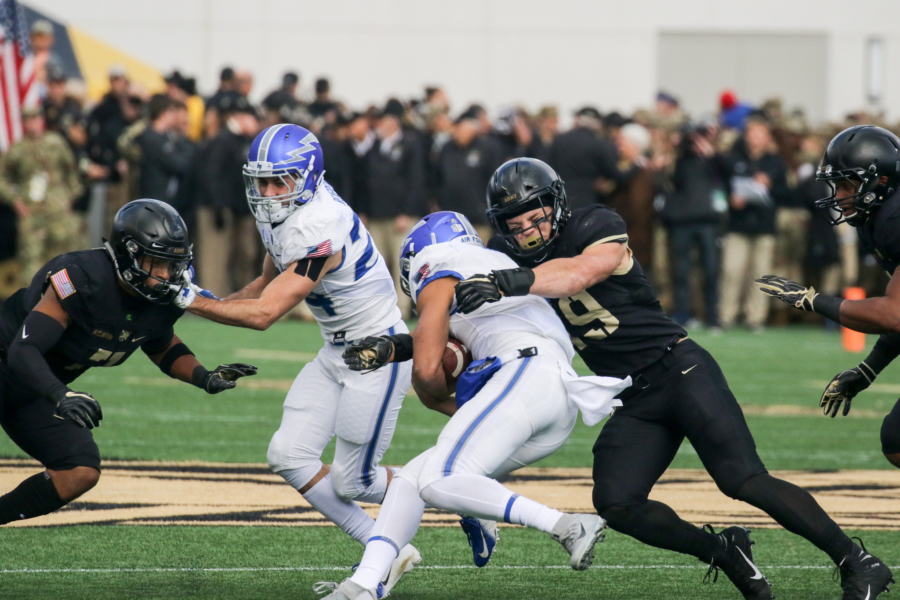 The home streak is still alive and we have guaranteed that the CIC will remain at the Academy for another year. Air Force on the other hand has to win out to even become Bowl Eligible. Saturday’s game was a must win for them.

After shutting Air Force out in the first half, I thought we were going to repeat last year or make it even worse for the Zoomies. To my surprise we let the Falcons “fly” back into the game and raise my heart rate again as they approached Field Goal range at the end of the game. The last thing that I wanted to do was play in overtime…again. There is only so much a man can take! Danno said it best in his recap yesterday…

The victory itself felt more like an escape than a real win.  Army absolutely dominated the first half but could get nothing going in the second, and we wound up with the defense on the field for an heroic play in the waning moments, which they made.  That’s your season in microcosm.

I am ready to keep the playbook open in the second half in order to avoid these comebacks. Opponent Defenses are making halftime adjustments, which is why we have been horrendous in the 3rd quarter this year. Army needs to preemptively change the offensive gameplan a little. It’s better to throw in some wrinkles so that the core plays continue to work, rather than see if they do.

Last week at EMU we threw our way out of second half trouble. This week Bateman’s Bad Boys bailed us out. Speaking of the Bad Boys, where was the Turnover Chain? Well it was at USMA…I was informed that someone in the USMA Chain of Command said no…at least for now. I can’t really think of what might be so offensive about a prop that involves bullets. Maybe we don’t want to remind the public that we kill bad guys for a living? There must be some other reason because the Army is running these commercials now…

Yeah, “Warriors Wanted.” These guys are legitimately taking care of business in this commercial. So if that is not it, then maybe it’s the optics of letting an outside agency or person have involvement? I never hear that when AOG or the A Club come around with the collection plate. Regardless, I hope that the decision is made to let the players have the Turnover Chain. They asked for it. If not, I will have it returned and wear it to Army vs. Navy.  If you think I sounded salty above, you are right. A LOT of time, money, and effort went into making that happen in 4 days. Regardless, it needs to be on the record that I respect the Chain of Command’s decision and will fully support them. I am Soldier and know how to follow orders, which is precisely why we didn’t start any public outcry. Moving on…Let’s take a look back my Friday Keys To Victory article to see how we executed.

Scenery second to none. #GoArmy pic.twitter.com/NbOepckgt6

Achieved the keys, won the game, enough said. Now for the good stuff.

How much weight is going on the bar? That’s right! 170lbs! Coach Hess with some help from Coach Swanson will put together a great workout to ensure that everyone can hoist the 170lbs Commander in Chief Trophy above their head with ease. There will be no fatigue or weakness during Army’s second year in a row celebrating CIC control.

Old Grads that have done it love to gloat. They almost make it seem like it was fun. As you listen, a small part of you wishes that you had that experience. Then Dean’s hour ends and you remember that they missed every weekend for a year…People will be quick to praise your 2,000 rushing yards. What they won’t remember is how those yards were gained. You took an absolute beating to earn the title DW2K. Running head-long into 350lbs defensive lineman over and over again tends to take a toll. Just like a true double century club Cadet, you have endured pain and adversity. Now you can enjoy gloating about the hours you “walked” and yards you ran!

You got it and they wouldn’t let you have it…So we will give you the virtual chain that got it all started. They don’t want this smoke… 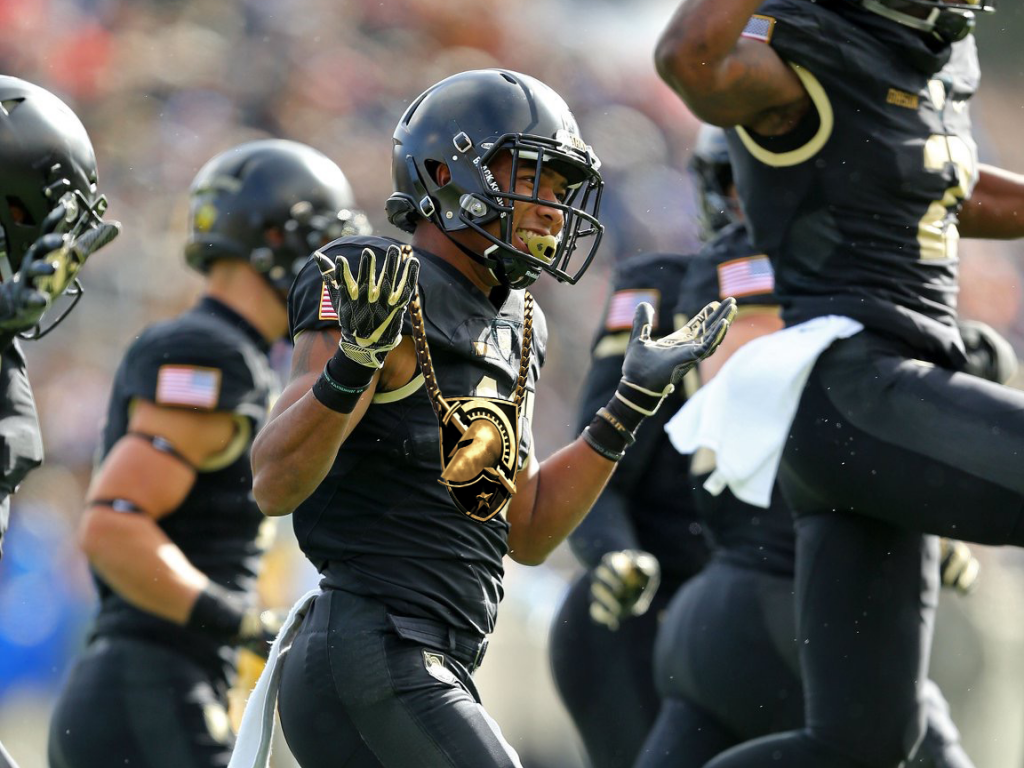 There are few things I enjoy more than watching the #MOB beat up on some entitled Zoomies. You all were able to establish the ground game by imposing your will on some seemingly overweight AF D-lineman. Please keep the #hateweek feeling going by beating up on a AF Cadet of your choice in the violent-condoning Arvin boxing classrooms. Dr. Barone is already getting the gloves ready!

The diving tackle tackle to secure the game and catch to keep an early drive alive secured max points for you both on Survival Gate #3 in Cow Drowning. Clearly, high stakes and pressure don’t inhibit your focus and execution. Thanks for the Superman-esque diving acrobatics! Now enjoy watching your classmates take the plunge while you look on to the next gate.

You are directed to attend a mandatory lecture regarding the proper military customs and courtesies because obviously you struggle with showing respect where it’s due. Being a sore loser is unbecoming of a Cadet (even an AF one at that). Oh, and until you can demonstrate appropriate use of your fingers, you will cup those paws at all times! No excuses! Stay Classy buddy. 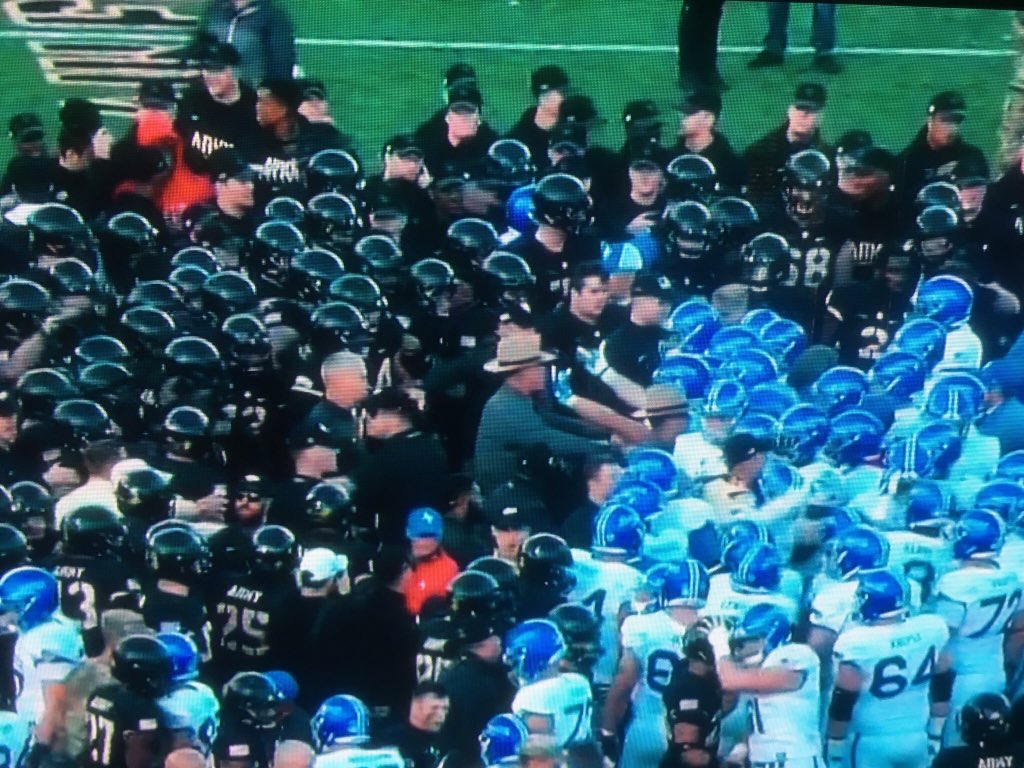 FCS Lafayette at Michie Stadium. Let’s hang 60 on these dudes! Make sure to check out the podcast this week. If you missed last week you can check it out here. It is available in both Audio and Video formats. Please subscribe share, rate, and comment!

As For Football’s Guide to Michie Stadium 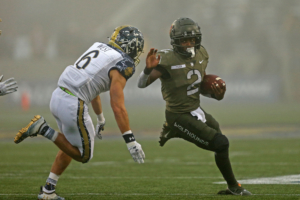 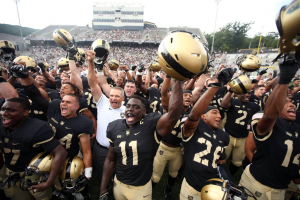