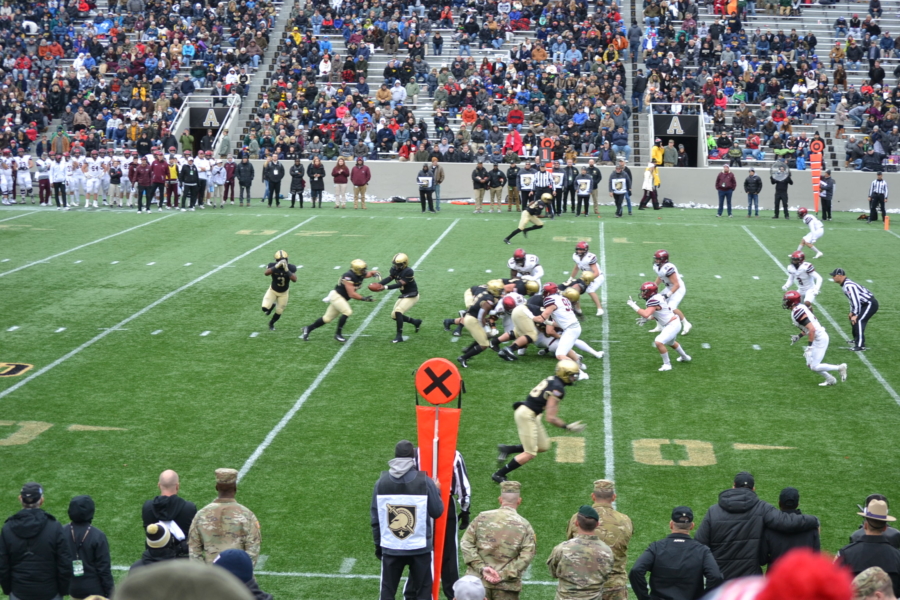 Ah, it feels good to get a win at Michie Stadium.  The Black Knights hit the field yesterday in fine form, winning convincingly against one of the best teams in FCS college football.  This win won’t earn Army the recognition that they maybe deserve, but if you’ve watched the games, then you already know that we saw one of the best, most fundamentally sound, disciplined teams to come through the stadium in a good long time this week.  Colgate stopped the run as well as anyone Army has faced, and they ran the ball better. Their read-option scheme and the effectiveness of their run blocking looked considerably better than what we saw out of Air Force just two weeks ago, and the Zoomies’ run game was pretty good.  But Army gutted it out and won convincingly, and that’s what counts.

In some ways, this week’s game was the opposite of what we saw last week against Lafayette.  Army dominated the statistics a week ago but disappointed on the scoreboard. This week, the Black Knights won almost as convincingly despite the post-game statistics looking fairly even.   Army gained just 35 yards more than the Red Raiders, but the Black Knights converted more 3rd downs, dominated the first half, got off the field on defense, and finished on offense in the fourth quarter.

Speaking personally, I loved this game.  It was one of the best times I’ve had up at the Stadium in years.

We didn’t get away from the house until about 8:30, but with the help of some very friendly shuttle bus drivers, we got up to my buddy’s tailgate in A Lot a little after 10 am.  Things got quickly out of hand. We had some chili and tasted some beers, but then Bill pulled a flask from his pocket and said, “Hey. You want some Wild Turkey?” 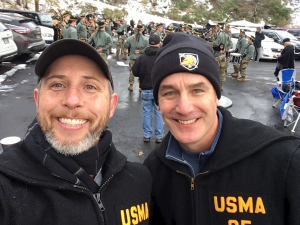 We went straight into Drunk Old Grad mode, for real.  My buddy Matt is lucky that his wife is a grad.  She’s been with us through a few Ugly American Nights.  This was more like Ugly American Morning, but still… My own wife, God bless her, was incredibly indulgent.

Also: we didn’t have to stumble far to reach the stadium.

Colgate took the ball first, but the Black Knights forced a three-and-out and then drove straight down the field to take a 7-0 lead.  That first drive was mostly Midline Option, alternating Quarterback Keepers and Fullback Dives. Colgate has an excellent interior rushing defense, but Army gashed them anyway, setting a strong, physical tone.  In the stands, we were happy as anything.

The second drive was more of the same.  Colgate ran seven plays and then punted.  Their interior running game off the zone-read looked really good all day, but nothing else did, and it’s hard to establish an offense off of just one play.  Colgate QB Sage Attwood finished 11/15 passing (73.3%) for 63 yards, but he never looked comfortable. That made it tough to establish anything besides that zone-read, though the Raider inside running game was undeniably strong. 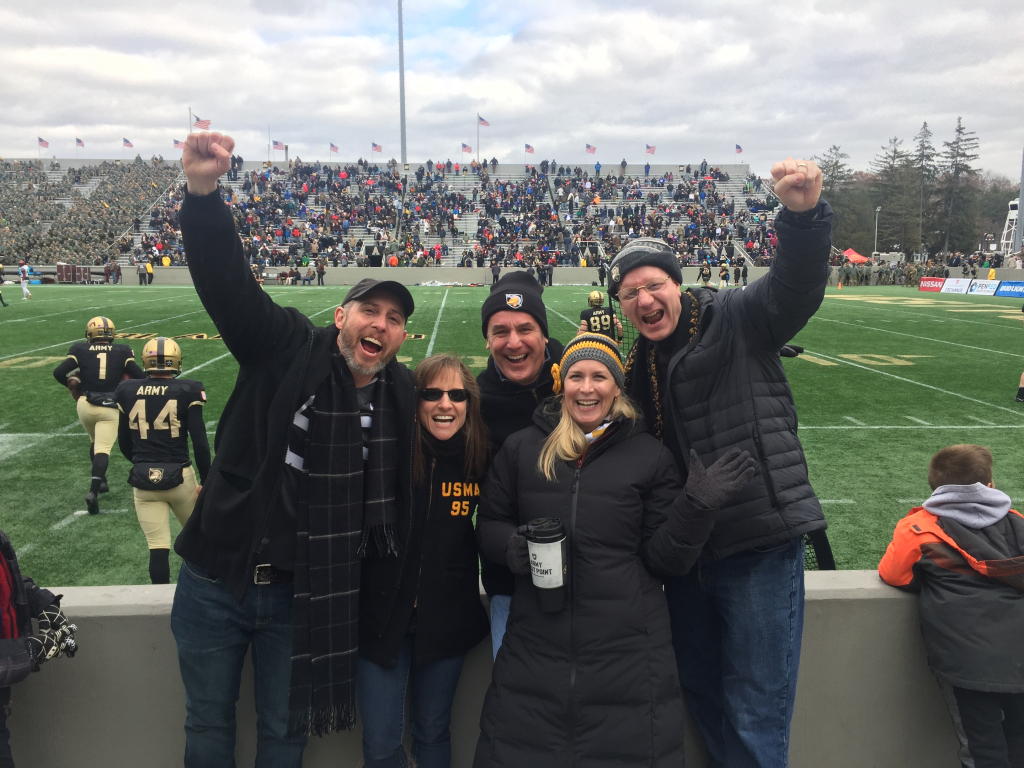 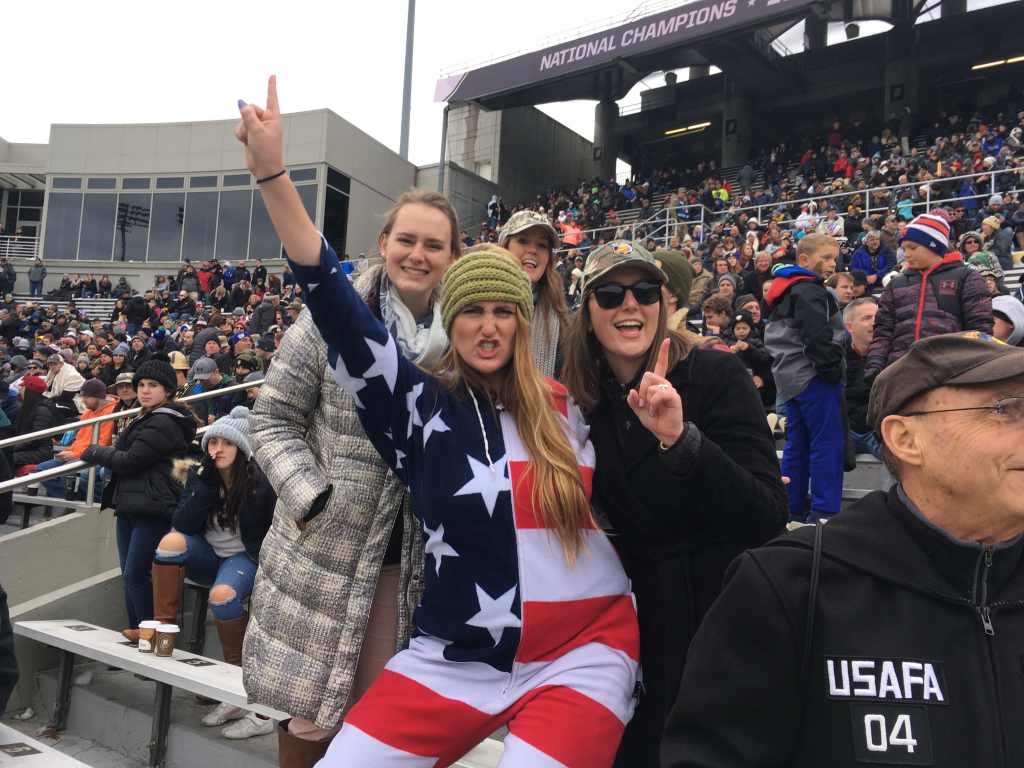 Halftime & the stadium was rocking!

Army’s second drive went 76 yards in 16 plays, taking 9:27 off the clock.  This time they mixed in a lot of pitch plays and assorted outside runs, keeping Colgate from clogging the middle.  Beautiful play calling, truly. They kept attacking in different ways, and that kept Colgate off balance.

The defensive play of the game came early in the 3rd quarter.  Army stalled on offense and punted, setting the Raiders up at their own 28.  RB James Holland took an inside zone-read for 34 yards to the Army 38. His next run went nowhere, but he got 8 yards on 2nd down, setting up 3rd-and-2.  Army stuffed him again, but then Colgate completed a short pass just in front of the sticks on 4th down. S Jaylon McClinton came up to push the receiver out of bounds inches short of the line to gain, and Army took possession on downs, maintaining control of the contest.

CALL STANDS!@ArmyWP_Football forces the turnover on downs after the official review confirms the ball was short of the first down. pic.twitter.com/hezaSJGqUJ

Colgate finally found some life later in the 3rd when they hit QB Kelvin Hopkins on an outside Keeper, forcing a fumble-6.  It looked like Hopkins was dead from the stands, but he got back up and didn’t miss a beat. He said afterwards that he was looking at his pitch keys and didn’t see the linebacker.  From the stands, I initially thought he’d made an errant pitch as he got hit, but no. He just got smoked.  Dudes were speculating after the game that he might’ve cracked a rib, but he played through it.  The guy is a tough SOB.

The Black Knights answered the fumble with another long drive, making it 21-7.  That one was mostly Fullback Dives mixed with occasional QB Keepers and outside plays to the slotbacks.  But then the Raiders answered with a drive of their own. They’d been running that inside zone-read all day, and Army kept keying on the pass, opening up room for Colgate’s Holland off the left side. He gashed Army’s defense repeatedly, eventually scoring on a left side zone run from 10 yards out.

James Holland takes it in for @ColgateFB!

It's a one score game in the 4th quarter on CBS Sports Network. pic.twitter.com/Hw5htBI85e

That made the score 21-14.  They game had just over nine minutes left.  A strong Army drive would put the contest away.  A lesser effort would leave room for a potential Colgate comeback and chaos.

Army put the game away.  The fullbacks ran hard for most of that final drive, but the key play was an outside run by Hopkins for 19 yards on 3rd-and-6 from the Colgate 22.  That made it 1st-and-goal Army from the 3 with just over 2 minutes remaining. Woolfolk scored, and after the kickoff, the Raiders were content to let the clock run down.

Hopkins went just 2/6 passing for 25 yards, but both throws kept drives alive at critical times.  He also led the team rushing with 19 carries for 90 yards (4.7 yards/carry) and a touchdown. This against a team that had previously allowed just under 1.9 yards/carry.  Woolfolk had 23 carries for 89 yards (3.9 yards/carry) and 3 touchdowns. He was a beast against a really stout interior D-Line, and his day’s effort moved him into 4th on Army’s all-time touchdown leaderboard.  SB Kell Walker had 8 carries for 32 yards (4.0 yards/carry) while SB Jordan Asberry had just 1 carry, but it went for 16.

That's another undefeated season at home!

Black Knights finished 2018 with a 6-0 mark at Michie! #GoArmy pic.twitter.com/IiEbDmYn3o

— Tennessee lost yesterday, so my dream of Army vs. Tennessee in the Liberty Bowl requires the Vols to win the Heavyweight Championship of their state next week against Vanderbilt. We might preview that game on the site if there’s time. 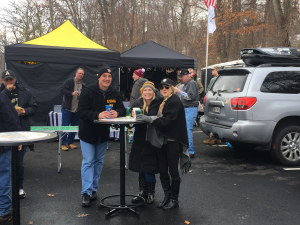 — Navy beat Tulsa 37-29.  The Mids put up 404 yards of offense but gave up 370.  They’ve got an interesting test against a desperate Tulane team that stands 5-6 after a loss to Houston earlier this week.  That’ll be worth watching.

Navy is nowhere near as bad as their record indicates, but their defense has been suspect.  What else is new?

— Air Force got beat at Wyoming.  Guess the Zoomies won’t be making that bowl appearance after all.

— Georgia Tech beat Virginia in a barnburner in overtime.  We listened to that on the car ride home. The Cavaliers tied it up with a last-second field goal but then couldn’t make a second field goal in overtime, and the Jackets escaped with the victory.

GT is now 7-4 heading into their annual showdown with Georgia.  I wish I believed that they can beat the Dawgs, but I do not.

Army’s got a couple of bye weeks before Army-Navy.  The team looks a little banged up; I think the time is gonna help.  But. We’re still gonna do our thing here at As For Football. Look for a poll later this afternoon to decide which game we preview this week. 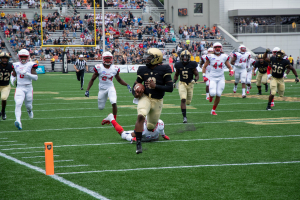 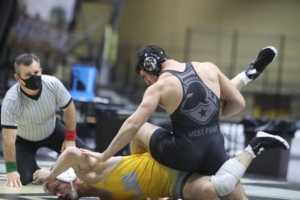