After a long, successful season of college football, it’s time for Army fans to turn their attention to the only game that truly matters, the Army-Navy Game.  This will be the 119th iteration of sports’ greatest rivalry. On its face, Army looks to have the superior team. However, the Army-Navy Game is always closer than the statistics suggest, and this Navy team is desperately searching for a way to redeem its season.  Army will need to bring its best stuff to get it done this week. 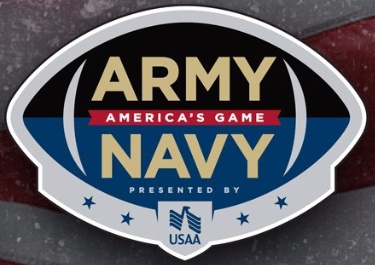 Army Football has had a great season.  It’s true. They’re ranked #22 in the AP poll and #25 in the Coaches poll.  DC Jay Bateman was a finalist for the Broyles Award, given to the nation’s top assistant coach.  Army’s O-Line has owned the nation’s the highest efficiency rating, and that’s allowed the team to lead the FBS in time-of-possession—by four full minutes!  Army is #1 in 4th down conversions, #1 in tackles-for-loss allowed/game, #2 in rushing yards/game, #4 in 3rd down conversions, #11 in total defense, and #12 in rushing defense.

This team does a lot of things well, but perhaps what’s most important is the way they’ve played on 3rd and 4th downs.  Army converts 57.1% of its 3rd downs and 90.9% of its 4th downs while allowing opponents to convert just 27.4% on 3rd downs and 45.8% on 4th downs.  As impressive as that is, those 4th down statistics are badly skewed by QB Gus Ragland’s standout second half in Miami-Ohio’s overtime loss at Michie Stadium.  Really, what this Army team does is play badass bend-but-don’t-break defense. Yes, they give up some yards on 1st and 2nd downs. But they rarely get beat deep, and they almost always get off the field when they get late-down opportunities.  With that, they’ve won a ton of close football games.

To be sure, the offense is playing complimentary football.  When you can eat the clock with ten-minute scoring drives, your defense can afford to attack.  To that end, Army is averaging just under 4.7 yards/carry on offense, but they’re getting those 4.7 yards reliably, and for a change, the team is also completing 51.8% of its passes.  QB Kelvin Hopkins Jr. doesn’t throw a ton, but his precision passing has allowed his team to stay on the field despite occasional 3rd-and-long situations, and that is why Army’s time-of-possession has ballooned this year to nearly 40 minutes/game.  These guys move the chains relentlessly, regardless of the down-and-distance. It’s been an amazing thing to behold.

It’s weird to talk about a team whose best offensive players are its center and its fullbacks, but here we are.  Army’s gonna run right at you, and if they have to, they’ll complete the occasional pass.

We can’t close this section without mentioning K John Abercrombie.  Abercrombie’s clutch kicking has given his team a reliable field goal game for the first time in recent memory.  Army is 8/11 kicking field goals. That makes the coming Army-Navy Game the first in years in which the Black Knights have not been at a severe disadvantage when they have to kick.

Congrats to Kenneth Brinson on being recognized tonight at the @NFFNetwork awards dinner. You’re a great example of what it means to be a scholar, an athlete and a leader. #GoArmy pic.twitter.com/XxE5IEHQGg 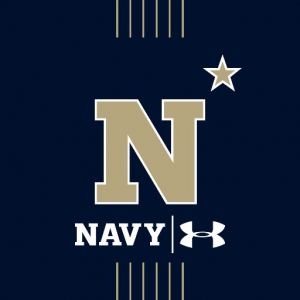 While Army has been living the high life, Navy has been living a nightmare.  The Mids opened with a tough road loss to a very good Hawaii team but then came home and beat eventual AAC-West champion Memphis by a point.  They then smoked FCS Lehigh, so that for a while it looked like the Mids had maybe righted the ship.  That changed when they dropped an overtime stunner to then 1-3 SMU, but alarm bells didn’t reach five-alarm status until they went out to Air Force and got gobsmacked.  Suddenly things looked bad.  Coach N. finally moved then-quarterback Malcolm Perry back to the slot, and his offense improved, but not enough to save his team from a seven-game losing streak.  Navy dropped games to Temple, Houston, Notre Dame, Cincinnati, and UCF before finally pulling out a victory against AAC bottom-feeder Tulsa. They then followed the win with another close loss to perennial AAC mid-carder Tulane.  More alarmingly, Navy’s vaunted triple-option offense rushed for all of 117 yards against the Green Wave, going just 2/15 on 3rd downs!

Navy’s coaching staff was right to move Perry back to the slot, but we’re still not seeing the kind of push along their offensive line that we’re used to seeing.  Sure, they’ve rushed for 288.5 yards/game and almost 5.0 yards/carry.  However, they’re converting just 39.2% of their 3rd downs and 60.6% of their 4th downs. Navy’s rushing attack has been explosive at times, but they’ve also been extremely inconsistent.  That’s a problem for an offense that hasn’t thrown the ball effectively. Granted, QB Zach Abey went 7/13 passing against Tulane. Still, his team is just 49/112 passing (43.8%) for 794.2 yards and 5 touchdowns. Worse, these guys have somehow given up a whopping 19 sacks.  Navy quarterbacks are getting sacked a little more than once in every seven drop-backs!

How is that even possible?

The Mids could maybe live with an inconsistent but explosive offense if their defense was playing better.  Alas, they’re giving up 189.0 yards rushing/game and a game-breaking 5.15 yards/carry. Ouch! Did I mention that these guys have allowed 31 rushing touchdowns?  Or 47.6% conversions on 3rd down and 76.9% (!) conversions on 4th down? That’s not even the worst of it. Opposing quarterbacks have gone 241/351 passing against Navy (68.7%!!!) for an average of 249.3 yards passing/game and 24 total touchdowns.  All of that equates to nearly 38 points allowed/game, which is almost double what Army has given up over this same time period.

So yeah.  Those numbers are not good.  And that opposing completion percentage is not-good in near-historic terms.  If you aggregated a single player’s stats from just those passing numbers against Navy’s defense, he’d be a Heisman Trophy candidate.  Seriously. Those numbers are alarmingly close to what Oklahoma QB Kyler Murray has put up week-to-week with the nation’s #1 offense.

I’ll close this bit by noting that Navy is 10/12 kicking field goals while allowing just 4/8 on opposing field goals.  I’ve no idea what that’s about, but I think Army had better watch the low kicks.

Inside the Goat Locker with Senior CB Jarid Ryan!

On its face, this does not look like it should be a particularly close game.  Army has played better by every measure. But this is a rivalry game, and these teams know each other very well.  Plus, every game in the Monken era has been close, even the 2015 game that matched Navy’s would-be Heisman Trophy candidate Keenan Reynolds against untested Army plebe quarterback Chris Carter.  That game came down to a last-minute interception. This year’s may as well. 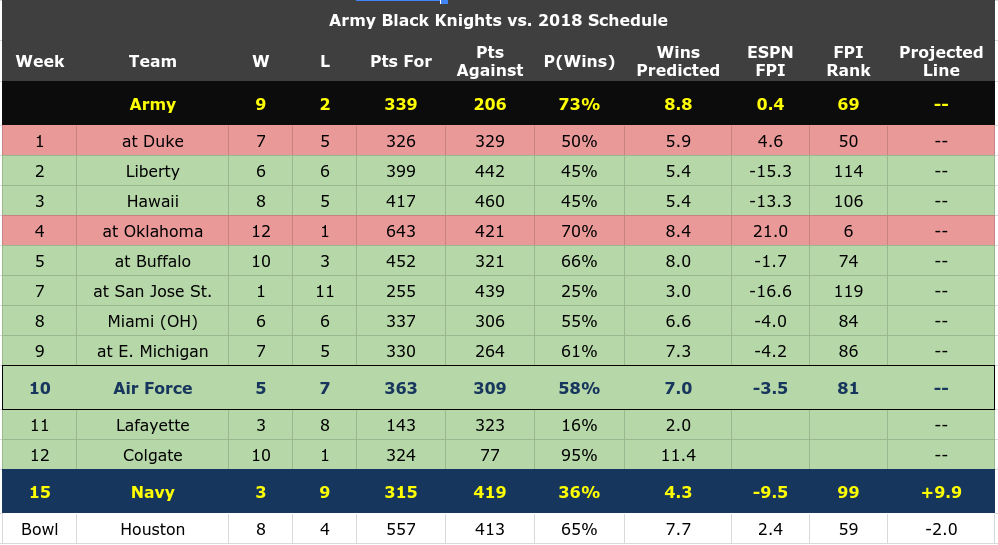 When Army has the ball.  Navy’s rushing defense was not statistically better last year than they are this year, but they did a great job getting penetration at the line of scrimmage, and that stopped Army’s inside running game for nearly three full quarters.  Army finally found some traction late in the second half behind T Brett Toth, but for awhile there, it was very tough sledding. It’s worth noting, too, that Navy’s defense started tough against Air Force this year, forcing a turnover on downs and three consecutive punts before wearing down against the Zoomies’ passing attack.  Really, this Navy rushing defense has been a lot better in specific spots than they have been on aggregate, especially against option teams.

The Mids know that Army is going to try to establish the Fullback Dive, and they know how to stop it.  I therefore expect that Army is going to have to throw some to loosen things up. And really, considering the way Navy’s pass defense has played, why shouldn’t Army throw?  We saw against Air Force how effectively the occasional quick slant opened up Army’s inside running game. I’ll be surprised if we don’t see some of that again this Saturday.  The Black Knights have a distinct advantage in QB Kelvin Hopkins’s passing ability, and I expect they’ll use it.

When Army is on defense.  This, to me, is the critical match-up.  This year’s Army defense has been a good bit better than last year’s defense was, and more to the point, I don’t think the Black Knights are going to be surprised by Malcolm Perry’s speed.  Perry ran absolutely wild in the first half last year, until DC Jay Bateman made an adjustment and got him under control. That’s not going to happen this year, first because Zach Abey will probably line up under center and second because this Army team understands that Perry is the Mids’ home run threat.

Where Army’s offense keys around the Fullback Dive, Navy’s keys around the Quarterback Keeper.  If Army can keep Abey contained and string Perry out on the pitch, they can keep this Navy offense from getting on-track.  That’s how the Black Knights win.

Save for the second half of the Tulane game, the Mids have not mounted much of a passing attack.  It will be interesting to see if their recent success encourages them to attack more aggressively through the air.

We're proud of you @CoachBateman for being a great coach and mentor to our players and young men. #GoArmy pic.twitter.com/mek84SyPsc 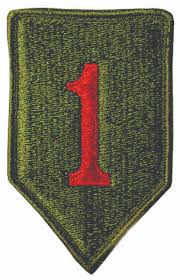 The line on the game opened at Army (-7) with the Over/Under initially set at 50.  Early money actually went towards the Mids (and the Under), so if you’re looking to bet the game, you might want to wait and see if you can maybe get Army (-6.5).  I suspect that the sharps were just betting that the game will be close, but honestly, it’s not hard to imagine the Black Knights winning by a touchdown. I’d expect something like 28-21 with the upside firmly on Army.  We’ve seen a lot single touchdown victories this season against explosive offenses, and more to the point, we know that Coach Monken hates last-second field goals.

While we’re talking about scores, 28-21 is about the highest I can possible see this game going.  Really 28-14—six total touchdowns—is more realistic. As of this writing, the Over/Under has fallen to 40, so apparently I’m not the only one who’s thinking that way.

Early weather reports called out the potential for snow this Saturday, but the current forecast has partly cloudy skies with temperatures starting in the mid-30s.  Army has been playing in that for the past month, so I don’t think the weather will be much of a factor. It might get cold late, but these guys should be ready. If you’re going to the game, however, make sure you take an extra layer for the fourth quarter.

Honestly, I like Army’s chances.  Navy may make some big plays, but I don’t think they’ll be able to maintain a consistent offensive rhythm, and if Army gets an early lead, I wouldn’t be shocked to see the Mids start trying to throw to get back into the game.  However, this Army team has been good at getting pressure in those situations, and Zach Abey isn’t gonna complete multiple 3rd down miracle passes like Gus Ragland did for Miami-Ohio this year. I think Army runs harder, gets sacks, and maybe forces a few turnovers.

The Army-Navy Game is on CBS with kickoff scheduled for 3:00 pm Eastern.  CBS Sports usually has the march-on starting at noon.

The Army-Navy Game is on CBS with kickoff scheduled for 3:00 pm Eastern.  CBS Sports usually has the march-on starting at noon.

No mission too difficult!  No sacrifice too great! Duty First!