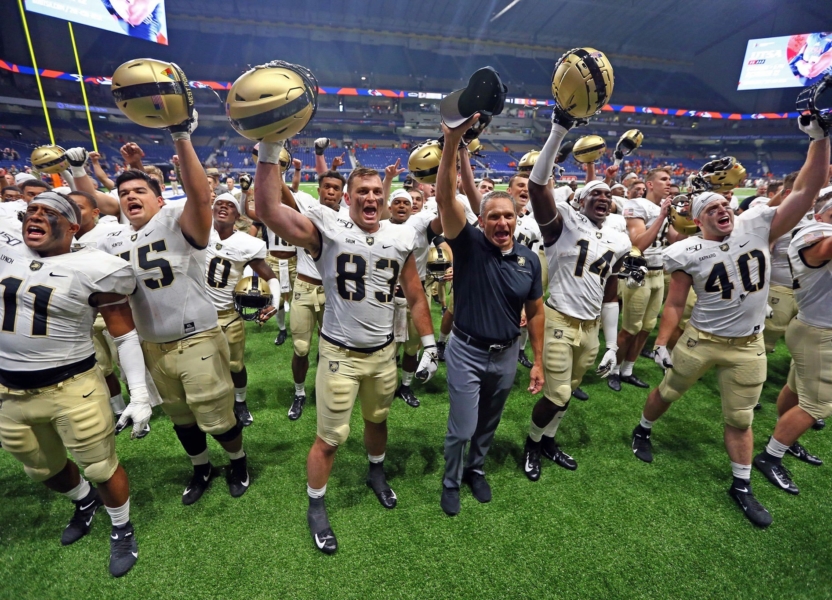 It wasn’t always pretty, but the Army Black Knights went into the Alamodome and earned a commanding victory, beating a talented University of Texas-San Antonio (UTSA) Roadrunners team that had come ready for a fight.

The middle of that game was rough, though, folks.  I’m pretty sure I’m a little balder now, my beard is whiter, and I might even need to refill my blood pressure medication again.  But Army covered a 17-point spread without their starting quarterback, without half their starting secondary for much of the game, without their starting center through that agonizing period in the middle, without winning time-of-possession in any meaningful way, and despite losing 2 fumbles, one at the goal line.

This was not by any means the most commanding win we’ve seen from Army Football.  In the end, though, there is no substitute for victory. Your Army Black Knights were victorious.

And really, it wasn’t that close.

If you watched the highlights of UTSA getting run over by Baylor, you might have noticed the Roadrunners’ tendency to play the running back on read-option plays while leaving the quarterback keeper and/or outside running lanes completely uncovered.  OC Brent Davis clearly saw that because Army came out running at the perimeter, wracking up massive yardage and an early touchdown on just three plays. Yearling QB Jabari Laws, filling in for Kelvin Hopkins, took his first carry for 35 yards, breaking it outside and then right up the sideline.  Then SB Kell Walker took a pitch play 26 yards, and folks, the only reason he stopped was because he’d hit the end zone. NO ONE from UTSA laid so much as a hand on him.

Despite some trouble later in the game, Army did by far the most damage running outside.  The defense forced a fumble on a strip-sack by CB Elijah Riley on the next series and got up 10-0 thanks to a holding penalty by G Jaxon Deaton and a good-looking kick by firstie K David Cooper.  Army’s defense then forced another three-and-out, setting the offense up for another long drive–9 plays, 51 yards, 4:34 off the clock, but that was capped by a FB Connor Slomka fumble. Slomka got the ball ripped out as he was falling forward inside the UTSA 10-yard-line, and yeah, it was a tough play, but my God, that one really set Army back.  C Peyton Reeder also went out at that point, and suddenly, the momentum belonged to UTSA.

The Roadrunners switched to a front with five defensive linemen, and they immediately started getting penetration from their very talented defensive ends.  Army’s offense ground to a halt. With the penetration, Laws had no time to operate the offense, and it took awhile for the Black Knights’ O-Line to adapt. I wonder, too, if they struggled making changes to the protection calls with both their starting quarterback and their starting center out of the game.  Regardless, the Roadrunners sold out to stop the inside run throughout the contest, and Army — very stubbornly — kept trying to force it inside. After awhile, they just couldn’t do anything. The defense played magnificently, forcing a sack-fumble, four punts, and a missed field goal to start the game, but eventually the Roadrunners got some offensive movement, scoring a touchdown on a 13-play, 65-yard drive that chewed up nearly 7:00.

And still Army’s offense couldn’t do anything.  After that initial flurry in the opening minute, the Black Knights kicked a field goal, fumbled, punted twice, and then fumbled again on a bad-looking sack.  The offense looked completely out-of-sync. By the time UTSA scored that touchdown in the middle of the third quarter, the Black Knights were on the ropes. The team that took Michigan to double-overtime was about to get knocked the Hell out by UTSA. 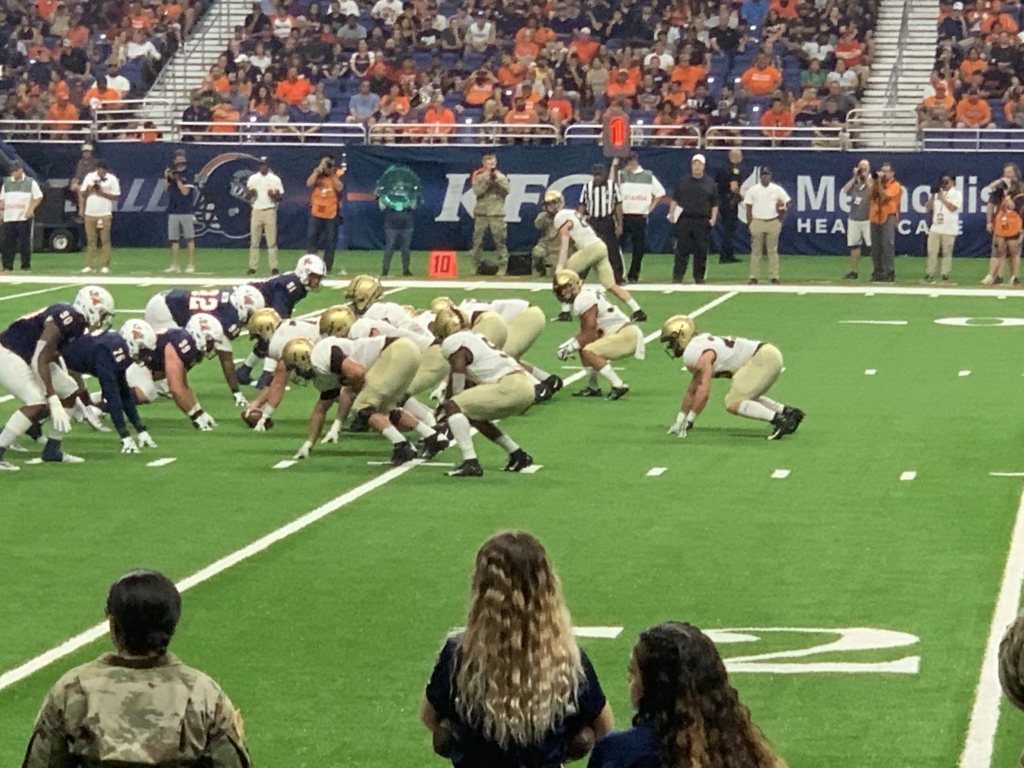 My buddy Andy took this shot and the next one. Lots of Army fans in the building, but it was still 2/3 UTSA-friendly. 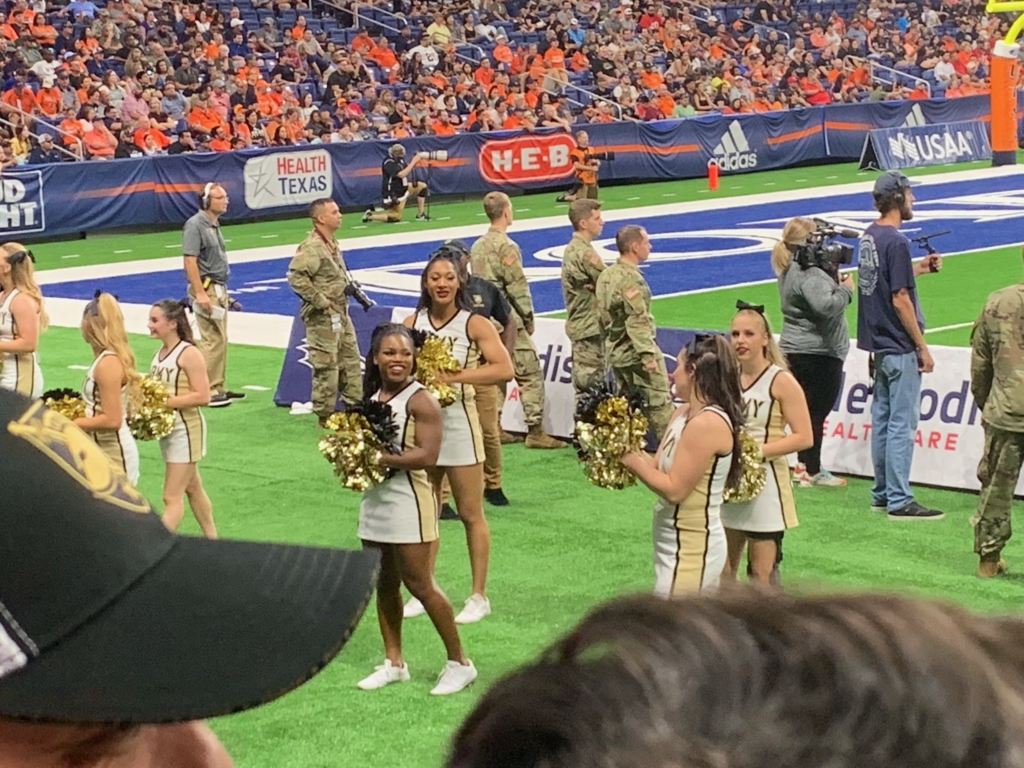 A decidedly athletic crew of Rabble Rousers. Not skipping Arm Day, that’s for sure.  They’re getting after it!

CB Javhari Bourdeau, back from his targeting penalty suspension, turned the game with a strip of WR Joshua Cephus at the Army 49-yard-line.  From there, Army committed to running outside, optioning the ends that they couldn’t block, and UTSA had no answer because they’d already committed everything to stopping Army along the midline.  That’s the downside of stacking the box behind five defensive linemen. Laws broke a 41-yard run for a touchdown outside, putting Army back up by 10 and swinging the momentum back firmly to the Black Knights.  Another UTSA drive went three-and-out, netting a yard, and then the Black Knights marched 70 yards for a touchdown in 9 plays and 4:31, taking us deep into the fourth quarter. At that point, the game was basically over, though both teams would score again.  With the commitment to the outside running game, Army’s four-minute offense got back on-track, and that was that.

The game wasn’t actually as close as it looked through the second and third quarters.  Army ran for 340 yards on just 55 carries (6.2 yards/carry) with another 18 yards on 2 receptions–a very efficient 100% completion rate.  Despite the tough-sledding when C Peyton Reeder was out, that’s explosive offense. Laws averaged just under 6 yards/carry, almost exclusively outside.  SB Kell Walker had a whopping 80 yards and 2 touchdowns on just 5 carries (16 yards/carry). He was totally unstoppable when they got him the ball in space.  SB Artice Hobbs IV had 54 yards on just 7 carries (7.7 yards/carry), and he had arguably the best outside block I’ve ever seen. He cut a defender then exploded through him to reach-block the next guy, putting two Roadrunners on the ground and springing Walker for a touchdown!  Even Connor Slomka, who had nowhere near his best game, averaged fully 3.5 yards/carry, often off-tackle and headed outside.

Kell Walker at it again! 😯 @ArmyWP_Football with a 17-point advantage👇

The Army defense was outstanding again this week.  All-in, they had 5 sacks and 9 tackles for loss. As much as anything, that’s why Army won.  LB Cole Christiansen led the team with 9 tackles, 6 solo, including a sack and a tackle-for-loss.  Firstie S Cam Jones was second had 7 tackles, 5 solo. Kwabena Bonsu and Amadeo West combined for 11 tackles, including one tackle-for-loss.  CB Elijah Riley had 4 tackles, all solo, including 1 devastating strip-sack and 2 tackles-for-loss.

Bottom line, these guys were all over the place against a very athletic offense.  The Roadrunners had just 75 yards of offense in the first half with a net 3 yards rushing.  They finished with just 260 yards of total offense and a net 51 yards rushing. All of that came despite Roadrunners’ QB Frank Harris going an astounding 24/33 passing (72.7%!).  That is incredible.

Jordan laid out three Keys to Victory on Friday:

— Run the damn ball.  Check.  Army wracked up 340 yards on just 55 carries. It’s worth noting that the offense was too explosive to win time-of-possession in a meaningful way.

— Hold onto the damn ball.  Nope.  Army had three fumbles, two lost.  This is becoming an issue. Army survived against UTSA, but turnovers cost them at Michigan, and it could cost them again against Tulane, Air Force, and Hawai’i.

Army’s got FCS Morgan State next, and with the heart of the season coming fast, I expect they’ll look to rest some starters again in order to try to get healthy before the big showdown with American Conference-West powerhouse Tulane.

Yes, Tulane is a powerhouse.

A win is a win, folks, and Army pulled this one off on the road despite missing some major pieces.  Last time Army had this many guys nicked, the Black Knights let a very similar Miami (Ohio) team take them to double-overtime at Michie Stadium.  This one felt close up until the Black Knights made some adjustments on offense, but the game is four quarters, and they all count.

The fourth quarter is ours!