Get to Know Me

I am a Florida boy born and raised.  I grew up in Orlando, FL and moved back there after graduation to take a job at a Big 4 consulting firm.

At the Academy, I was a Rabble Rouser for three years before becoming the Brigade MRW Gameday Operations Officer.  I have never watched an Army game from the stands, every game I attended as a cadet I was on the sidelines either as a Rabble Rouser or as a member of the MRW staff.  When not enjoying my sideline pass, I was a frequent flyer at the Firstie Club and watched a lot of Netflix. I am proud of the fact that I only studied in the library 6 times in my 47 month journey.

Favorite Memory: Being on the sidelines for the 2016 Army-Navy Game and running onto the field with 30 seconds left in the game.  Since I was already on the sidelines, I was one of the first people to charge the field.  When I got to center field there was no one else there besides Navy players so I gave a quick “Beat Navy” and ran back to our end zone.  I have already told my girlfriend that any memory we make together will always be second to the day we broke the streak.  Kidding….sort of.

My hobbies include Army Football, College Football, lifting, and biking.  As an Orlando native, I enjoy cheering on the UCF (Golden) Knights when I can’t cheer on the Black Knights. 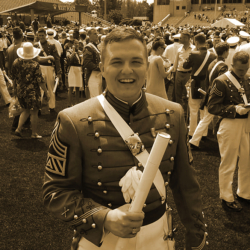