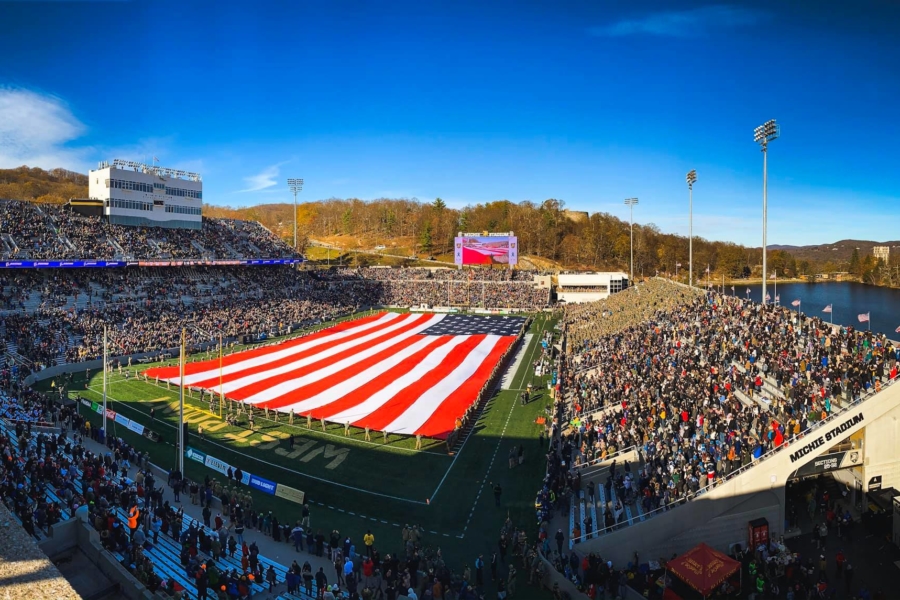 Army fans wanted blood and the team delivered!  It was a UMass-acre.

Someone had to say it.

Black Knight Nation had been craving blood since the start of this 5-game losing streak.  The Brave Old Army Team delivered and look like they’re now back on track! 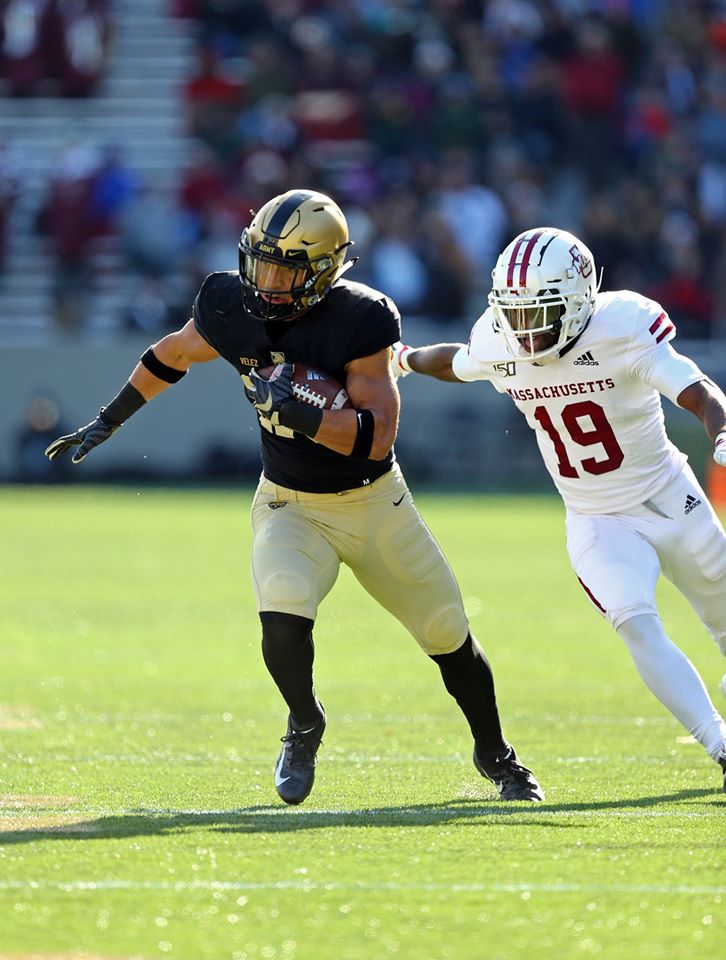 The Army Fan checklist was all checked off on Saturday.

What Army Fan isn’t ecstatic after that performance?  Even Danno was riding the good vibes!  There’s a lot to be happy about this Veteran’s Day, so let’s give out some spirited fake awards!

That's the total of pushups today at Michie. #GoArmy pic.twitter.com/ofwPOZfF7W

Before we jump in: Don’t miss the opportunity to win FREE Army-Navy Tickets!

Check it out:
— The Ultimate Army-Navy Experience Giveaway

I’m sure this doesn’t surprise many people.  This play stood out among the highlights for a number of reasons.  Firstly, Jabari Laws’ elusiveness and breakaway speed jump off the screen!  He’s something special and we need him to stay healthy and eligible for the coming seasons.

The most impressive thing to highlight is the incredible effort seen by THREE downfield blockers.  This is what turns a good gain into a touchdown.  SB Kell Walker and WRs Mike Roberts and KJetil Cline all deserve a ton of recognition for their selfless play!

It’s been a tough stretch for the big men up front.  Y’all have been dealing with injuries and difficult opposing fronts.  But, after it all we can celebrate this 498 yard rushing performance by letting the big men eat!  That’s right!  All the skill players that benefited from your efforts have chipped in to fund a Highland Falls smorgasbord!  We’ve got American Burrito, Brothers BBQ, Schades, Dong Fongs and more!

Eat up and keep the momentum going into these last three games!

.@ArmyWP_Football capitalizes on the turnover to extend their lead

There seemed to be some significant technical difficulties with the audio systems on Saturday.  Ben Holden’s mic dropped out leaving us with Ross Tucker’s attempt at play-by-play commentary.  Also, there seemed to be some consistent issues with the on-field audio leaving us as the viewers with either incoherent noise or expletive-riddled shouting.

We understand sports broadcasting isn’t an exact science.  So, we’ve filed a work order with the Battalion S6.  They’ll come out with dusty speakers and mics (used solely for Hails and Farewells) and ask if you’ve connected to a power source and rebooted the machine.  It’s not much, but it’s the best the Army can provide.

Don’t even think of calling the Network Enterprise Center.

There are very few informal titles that an Army officer truly wants.  Being deemed “Chill” is one of them.  After canceling SAMI, the Corps effused praise and adoration for the Secretary of the Army.  But to show you are a true Man of the Corps, you jumped into the crowd of cadets immediately following an interview on live TV.

Because of this, thousands of cadets and officers alike have verified your AIM 2.0 (new HRC online dating site) profile to reflect how truly “Chill” you are!

We like turnovers, and we cannot lie!  Both S Ryan Velez and CB Elijah Riley took advantage of poorly thrown balls resulting in the dowsing of any minuscule momentum the Minutemen might possibly have built.

Aviation Lesson of the Day:  In a contested environment, tactical employment of aviation assets is the best way to mitigate heavy air defense presence.

The Minutemen did not do this.

Riley and Velez both kept their heads on a swivel and came up with big picks!  Y’all have been submitted as promising potential air defenders.

Coach, you understood that militia don’t stand a chance against conventional forces in a head-to-head fight.  That’s why you relied on surprise and trickery.  Well done!  Too bad the team couldn’t execute after that initial passing touchdown from QB Andrew Brito.

To help with future encounters, we’ve assigned you a special operations consultant for instruction in unconventional warfare.  He will help you rebuild the program so that you’re better trained and equipped for guerrilla warfare.  Just don’t fool yourself into thinking you’ll ever have a beard as sweet as his, though. 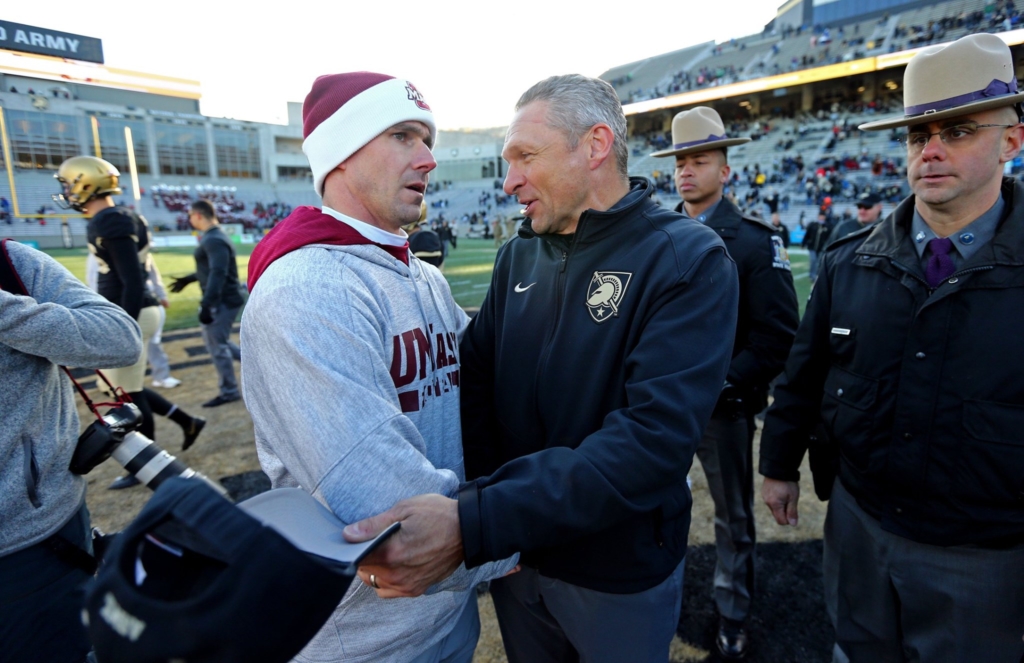 Jabari Laws – Player of the Game

The man of the hour!  After a great performance at Air Force, you followed it up with a dominant showing at home — 140 yards on 8 carries and 3/5 passing for 48 yards through the air.  Army fans were worried about having another dual-threat quarterback when firstie Kelvin Hopkins graduates.

We no longer have to worry!  We just need you to stay healthy and eligible through yearling year.  Don’t let second semester sneak up on you.

As an offense, the Minutemen’s performance was dismal.  But the most notable issue in their game was the staggering number of dropped passes by UMass wide receivers.  Seriously, y’all are not doing your 5’8″ quarterback any favors!

What was distracting you guys from securing the ball?  It wasn’t SAMI, WPRs, Drill, or anything like that.  Maybe y’all were daydreaming about entering the transfer portal…?

That’s probably not going to happen.

The O-Club is back in business!  Come on in!

Artice Hobbs IV continues to maintain his play-making status with an incredible bobbled catch!  Get this man the ball!

The entire young-gun backfield gets in (not to drink though).  FB Jokobi Buchanan, QB Jemel Jones, and FB Anthony Adkins look to have a bright future for Army Football.

The pressure from Army’s D-Line prevented Anthony Brito from delivering anything like accurate passes.  Hats off to LB Donovan Lynch, Edriece Patterson, and DL Jacob Covington for getting to the quarterback in the backfield. 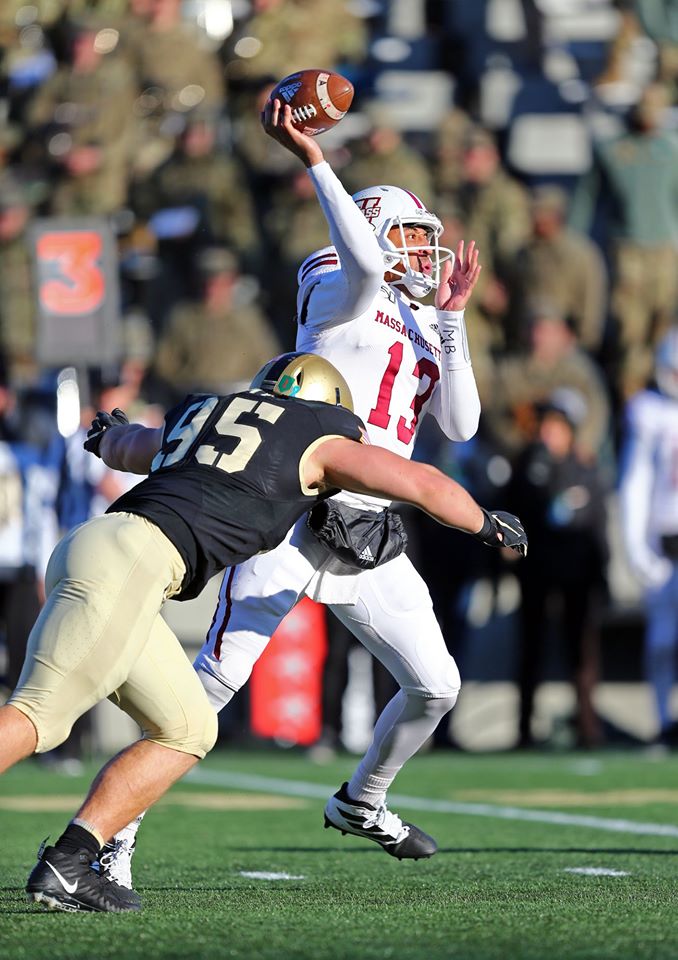 We’ll provide more reaction and analysis from the game next week as well as a VMI preview on the Army Football Show (via Stitcher, Spotify, or iTunes).  Look for that on Thursday.  The Night Before the Night Before! 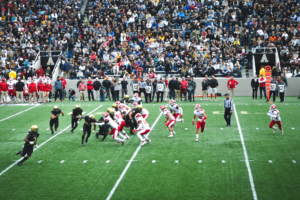 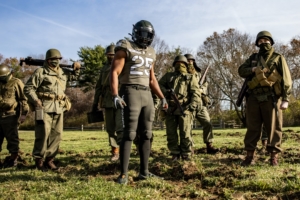 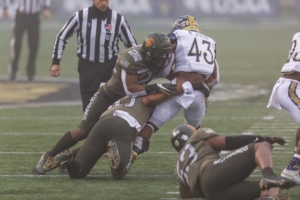 Sir, there are… We’re getting into the defense this week,[...]