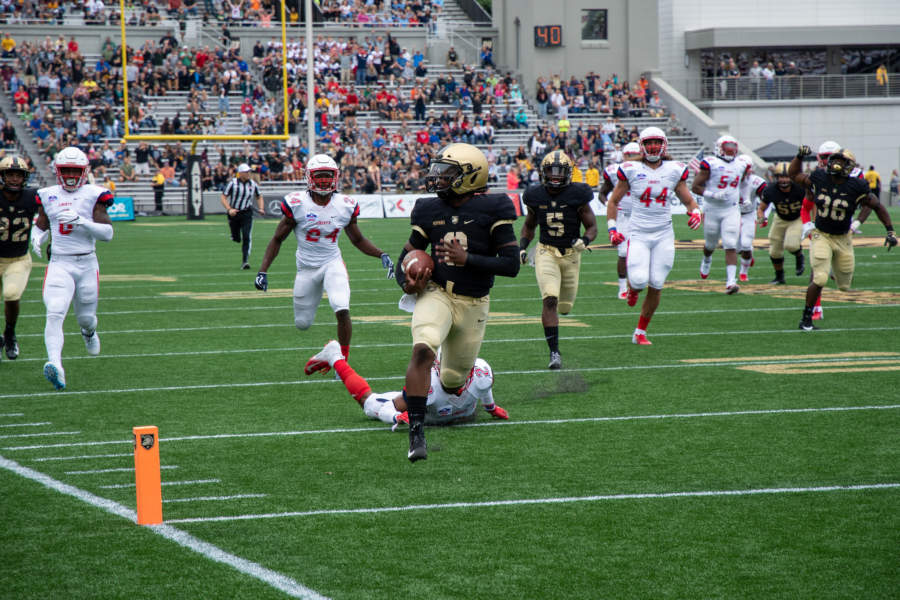 What a great way to start off the home campaign at Michie Stadium. The Cadets smashed the Liberty Flames, a team in their first year transitioning to Division I. Liberty came off an impressive 52-10 victory over Old Dominion last Saturday. There will likely be a rivalry between those two second tier Virginia FBS schools moving forward. Just a year ago Liberty finished with a 6-5 overall record highlighted by a win over Baylor in Waco, Texas. This year Liberty returned 16 starters including their quarterback. So before you go around the barracks saying “oh it’s just Liberty,” understand that they are actually pretty good. For the Home Opener Win the Entire Team will be on Stayback privileges Thursday and Friday.

The Black Knights offense shined like a Sta-brite belt buckle by putting up 510 total yards including 449 rushing yards (in true Army fashion). Penalties hurt us early in the game as we earned over 100 yards in yellow flags during the first half (45 yards due to new cut block rule). If you were not read into this rule change before the season, understand that it is going to make it a lot harder for us to compete. Coach Monken has been outspoken on the affect that the new rule will have on our team’s ability to win. Basically, the NCAA eliminated the ability to block below the waist down the field. How do you expect our 5’6″ 145lbs running back to block Joey Bosa? Sign our Petition to get this rule removed!

After a 17-0 first half, the Flames were able to threaten by scoring 14 points in the 3rd quarter. Ultimately, they were unable to stop the Cadets rushing attack as the Black Knight defense made the necessary adjustments leaving Liberty’s Head Coach looking like CDT CPL Snuffy opening up his PH202 WPR.

Those ice baths you earned last week really paid off. You were relentless against Liberty, completely shutting them down in the first half. Reminds me of that one Yuk that wouldn’t stop bidding on company fridge privileges during the auction…$250 later he got what he wanted. Your respective company activities officer is hooking you up with $15 to the company store.

You embody the Soldier’s Creed “I will never accept defeat. I will never quit.” After being beaten on coverage you hustled and stripped the ball, preserving the Army Lead. Not that Liberty would have come back, but too many times over the years I have seen teams get back in games late against Army.

No turnovers this week! So as promised in the Duke Game Superlatives, we have secured a tandem jump with Coach Falzone on Thursday during Dean’s Hour. Meet at the center of the plain by the wind sock.  Hope you’re not scared of heights…or falling.

Army Field Goal Unit – All you can eat PB & J

Landon Salyers’ 42-yard kick before going into half gives us some faith in the Army kicking team.  Admittedly, the kick looked like a bad Tuesday night spread at the Mess Hall: ugly but PB&J is there to get the job done.  This special teams unit will be one to watch throughout the season, hopefully getting better with every game.  Enjoy the sandwiches.  The extra protein should help with that post-kick flexing.

Officials – Bring Your own Water to the Game

You want to call three 15-yard illegal blocking penalties on us in Michie? Well you can pound sand Troop! Next week against Hawaii bring your own Hydration. No more ice cold water delivered from our managers or power-aid and snacks in the locker room at halftime. Sign this petition to get your water privileges back.

After being ejected for acting as a human torpedo, we think you could use a tune up on your fundamentals at the 12 and under Heads Up Football Camp this summer (hint: heads up and use your arms). In the mean time, head on over to your local spinal clinic to make sure that C4 Vertebrae is not out of place like a Cowboy Firstie in Central Area on Thursday night. 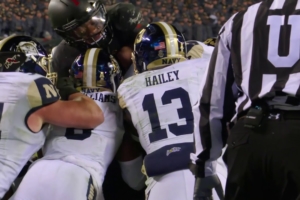