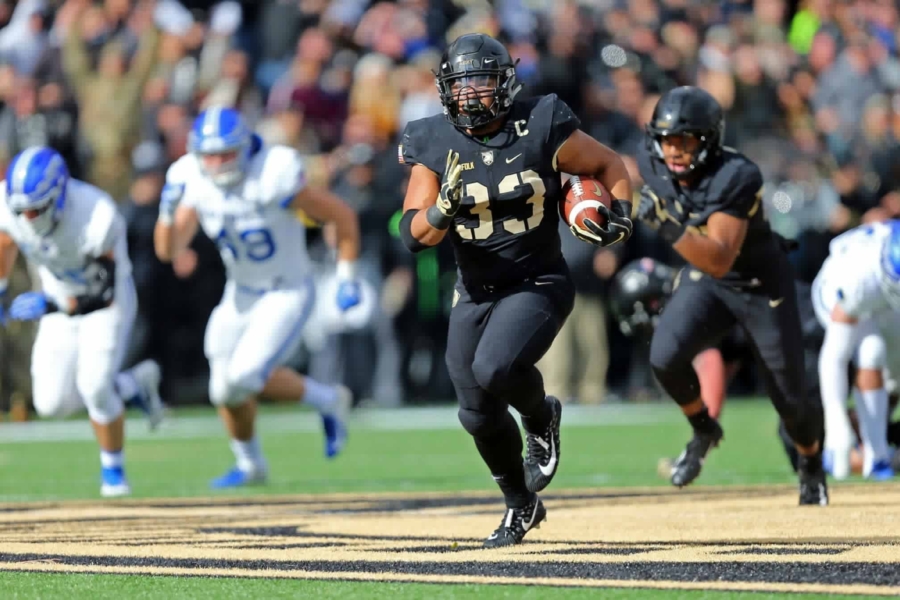 The Black Knights won yesterday in thrilling style.  They’ve now won five games in a row, and at a minimum, they’ll retain the Commander-in-Chief’s trophy at West Point for another year.  They’ve achieved a level of team chemistry and consistency that I honestly never thought I’d see out of Army Football. Plus, they’re headed to a bowl game, and who knows, they might even be ranked this week.  After a long morning of rain and wind, the sun came out, and we got football glory.

That stuff is all good.

Ok so Incase you were counting.

But man, I didn’t love it at times.  The victory itself felt more like an escape than a real win.  Army absolutely dominated the first half but could get nothing going in the second, and we wound up with the defense on the field for an heroic play in the waning moments, which they made.

That’s your season in microcosm.

In the first half, Army ran 37 plays for 209 yards and 11 first downs.  They held the ball for 22:07 and scored 14 points unanswered. But Air Force made halftime adjustments, changed quarterbacks, and got good push in the middle of their defense, and with that, they were able to pull to within 3 points.  By the end of the game, the Falcons had outgained Army 322 yards to 286, earned one more first down, and held the Black Knight’s vaunted triple-option rushing attack to a total of just 242 yards on the ground and just 33 yards rushing in the second half. 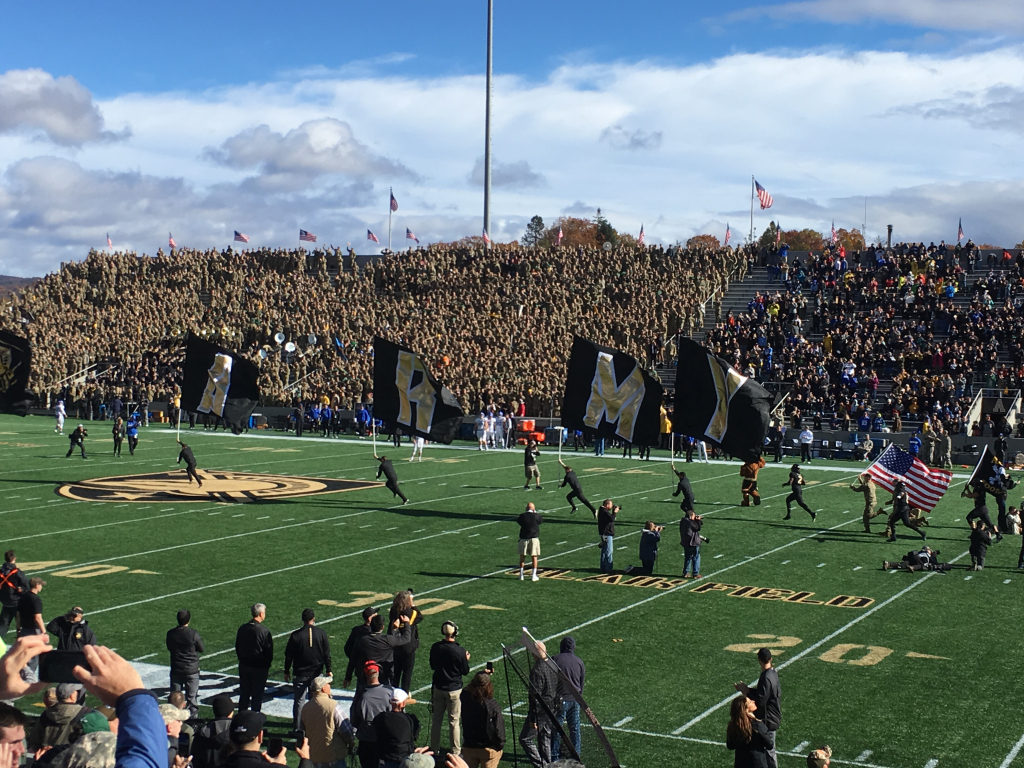 I don’t want to take anything away from Army’s defense, because they played a really good game against a team with a legitimately explosive offense.  They forced a turnover when they needed it, and they held a desperate Air Force team to just 3/9 on 3rd down and 1/3 on 4th down, and ultimately, that’s why Army won.

But, man, I’m just not sure it had to be that hard.

First things first.  The logistics of a sold-out game at Michie Stadium can be nightmarish.  We hit the road just after 7:30 am with the intent to be on post by 9:00, and that was a good idea.  We didn’t quite hit all our time hacks, but we were parked before 10:00 and set out immediately for my classmate Chris’s tailgate up on Daly Field.

Great tailgate, abysmal weather.  Poor Chris had been out in the rain and wind since 6:00 am setting up, and for awhile, it was just Ranger Sunshine.  It was fun, don’t get me wrong, but I thought the game was gonna be a straight-up slugfest with no passing whatsoever.  Thankfully, the sky cleared as we started heading for the stadium, and if it didn’t quite get warm, we at least had a chance to dry out.

We got through security quickly despite the crowds and got seated.  No big deal, save that the security teams did an excellent job processing all of those people.  The teams ran out, did the coin toss, and did the kick, and then we were off. Army got the ball first for, I think, the very first time this season.

The first drive was not pretty.  21 plays, 75 yards, multiple personal foul penalties, and a goodly amount of passing out of 1st-and-25 situations.  But Army played full-out, and QB Kelvin Hopkins threw the ball with authority. At the end of all that, Army was up 7-0.  The defense got all over Air Force afterwards, but after a few exchanged punts, Army ran another long drive, my favorite part of which involved a Jet Sweep to SB Jordan Asberry out of a spread Read-Option look, followed a few plays later by a Fullback Counter that FB Darnell Woolfolk took 52 yards, setting up Army’s second touchdown.  To this point, Army had held the playbook wide open, keeping Air Force’s defense off-balance and moving the ball pretty well.

CB Mike Reynolds jumped a route at the end of the first half to keep the Zoomies off the board–arguably the key play of the game, all things considered–and folks in the stands felt pretty good as we headed to halftime.

Mike Reynolds takes the ball away from Air Force with a spectacular interception. pic.twitter.com/LGYHJSm1tc

The halftime show was okay.  They got the Benny Havens Band out there, and that was cool.  A recruit also walked by, saw my ring, and stopped. “I like your ring, sir.  I’m gonna get one of those real soon.” I saw him later with the team, so there’s one commit.  Seems like a good kid.

Air Force went with Donald Hammond III at quarterback to start the second half, but they still went 5-and-out on their first possession.  To my eyes, Hammond looked noticeably faster than previous starter Isiah Sanders, and Hammond plays more decisively, but he’s not quite as accurate with the football.  But Army couldn’t do anything with the ball, either. Hopkins got a yard and then Woolfolk carried twice for 8, but Coach Monken decided to punt from his own 29. I didn’t love the call, and for awhile I thought it might come back to haunt the team.  But the second half of this game saw Army’s offense play super-conservatively, and that’s not really their best thing. We’ve seen that a bunch in second halves this season, and it seems to lead to chaos every time. In this case, Air Force drove all the way to the Army 31 before again turning the ball over on downs.

Is that @ArmyWP_Football scoring another TD on the ground?

You bet. Black Knights extend their lead to 14-0. pic.twitter.com/CAfD13hXhm

As much as I’m complaining here about the offense, we were halfway through the 3rd quarter, and the Zoomies hadn’t even been in the red zone.

Alas, Army’s next series was a disaster.  They tried to get the ball out to the slotbacks, but it just wasn’t happening.  By this time, Air Force was steady stacking the middle of the box. Last week, we saw the Black Knights throw their way out of that at EMU.  This week, they kept it on the ground, and nothing happened at all. Then P Nick Schrage let a punt get blocked, and Air Force wound up with the ball at the Army 34.  This led to the Zoomies’ first touchdown, though they missed the extra point.

Army came back with a 13-play, 62-yard drive that netted a field goal.  Notably, they started with a 9-yard pass to WR Glen Coates, and that loosened things up a bit.  They wound up with 4th-and-3 from the Air Force 13 and elected to kick a field goal to make it an 11-point game.  That was the right call. Not only were those critical points, but Army’s last 5 runs had gone for 1 yard, 2 yards, 1 yard, 2 yards, and 4 yards.  Failing to convert on 4th-and-3 would’ve allowed Air Force to tie the game.

Hammond III was probably at his best on the next drive, but he still needed a terrible pass interference call on 3rd-and-10 to get into the end zone.  It looked like a ticky-tacky call to me on a play where the wide receiver took an egregious dive, but what can you do?  Air Force scored and made the 2-point conversion, making it 17-14.

Army got the ball back with 5:27, and if they’d looked just a little better on offense, we could’ve avoided the final drama.  Instead, they went into a shell. They called one outside pitch to Woolfolk that went for 8 yards, but beyond that, it felt like they were just running the ball into the center of the Zoomie D-Line over and over again.  I did not love it. And then they tried a 40-yard pass play on 3rd-and-9 when they really just needed to pick up a conversion with a high-percentage throw. Granted, they should’ve called Pass Interference on the throw, and that would’ve turned the game, but still…  3rd-and-9, and you need a couple of first downs to win, so you throw a low-percentage bomb? Try that on 2nd-and-short not 3rd-and-long.

TURNOVER ON DOWNS!@ArmyWP_Football stuffs the run on 4th down to preserve their late lead. pic.twitter.com/GAOWtzesUU

Army’s defense was heroic over the final series, and the offense converted on 4th-and-1 with :17 left to end the game outright.  But it was hard. And it felt like we were running our heads into a wall at times in the second half when we had other options out there.  Hopkins finished 3/5 passing for 44 yards, and I don’t think I’m going out on a limb here to suggest that he maybe could’ve thrown 3 or 4 more passes and thereby moved the chains in the second half.  As it was, they let Air Force crowd the line in the middle, and it sucked.

1. Hammond is a much better player than Sanders, and Air Force has a better offense when they commit to running the ball.  They spread the field a lot and get a lot of people involved in the running game. It’s impressive, and if they committed to it, it would work even better than it already does.

I’d very much like to see Army steal some of those plays and run more looks out of a spread set, especially when teams start crowding the middle against the Fullback Dive.  It’s becoming a systemic problem against better rushing defenses.

Perfectly executed option. Joseph Saucier takes it in for the score.@AF_Football is making this one interesting late, as they cut @ArmyWP_Football's lead to 3. pic.twitter.com/DELfednydS

2. Army’s defense is legit.  I mean, we knew that, but they keep proving it.

3. Air Force has a great rushing defense, and Army ran for 4.1 yards/carry on them.  So maybe I am being too hard on these guys. I mean, the other guys want to win, too.  They were salty after the game; you could tell. But it felt like the playcalling got stale in the second half, and as I said, I did not love it.

4. Jordan Asberry is a fantastic receiver.

5. Finally, Navy got masterblasted yesterday. I thought they might turn their season round, but now I wonder if Coach N. is maybe losing the locker room. 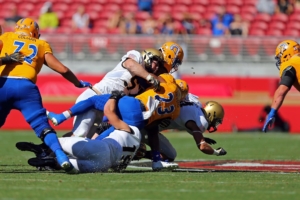