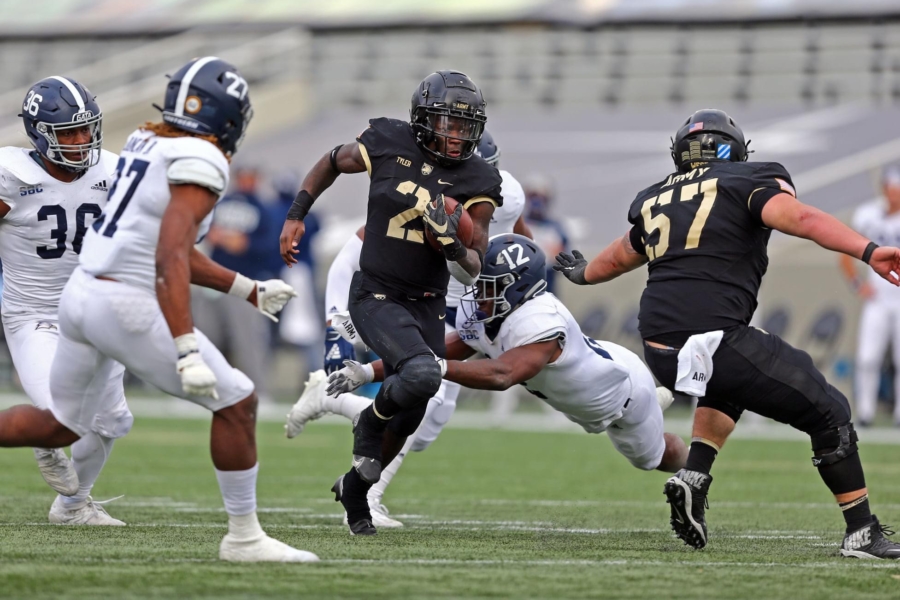 Well friends, that was some game.  I don’t even know what to say.  I noted on Twitter at halftime yesterday that every once in a while, Army reminds us that rooting for them is an honest-to-God gut-check.  West Point is literally daring you to care about this team with every bit of your heart and soul.  It’s at times like these that we’re reminded that every win at West Point is a win against the odds.

Sometimes, that’s just another part of the haze.

All that emotion paid off today.  Today we got a heady, heart attack-inducing win at Michie Stadium on Senior Day, the kind of stunning come-from-behind home victory that Head Coach Jeff Monken and his crew make their personal specialty.

Good God, I love this team.

The Black Knights made it eight in a row at Michie Stadium with a come-from-behind 28-27 win over Georgia Southern on Saturday.

If you’re gonna make mind-bogglingly bad plays, it’s a good idea to make them right at the beginning of the game.  Not recommended, obviously, but if you must do it, this is the way.  In this case, that meant spotting the Georgia Southern Eagles 14 points in the first half of the first quarter, at a point in which Southern had gained all of *1* yard of total offense.  This was clearly not the start we were looking for, but hey, at least the Black Knights left themselves enough time to recover.

Say this, too, for both the coaching staff and the team itself — nobody panicked.  That was the biggest difference between this week’s game and last week’s.  Last week, the Black Knights tried to get creative when things went badly, and it made everything worse.

So yeah.  QB Tyhier Tyler got off to a tough start.  Three fumbles in the first half had half of Army Football Twitter calling for his head.  First career start, and you put the ball on the ground three times?  Let’s not pretend it’s easy to come back from that.

My man came back out, though, and he was cool and collected in the second half.  His team came together around him.  Slowly, Army’s offense started chipping away.  Relentlessly.  They ran right at Georgia Southern, wearing down that big defensive front, forcing substitutions, eventually forcing injuries, all while pounding away with run after run after endless run.  There was no finesse here, no trickeration.  Army finished with just 243 yards rushing on a whopping 73 carries.  Friends, that is exactly 3.3 yards/carry, mostly off sheer blunt force trauma.  They got just enough chunk plays.  More importantly, they went 9/18 on 3rd down and 4/4 on 4th down, and somehow, that was your ballgame.  Georgia Southern flat could not get off the field on defense.  Not when it counted.  Not in the second half.

Tyler finished with 121 yards on *35* carries.  Not how you want to spend your entire career, but it definitely got the job done this time out.  FB Jakobi Buchanan came second with 18 carries for 53 yards (2.9 yards/cary) and a touchdown.  Army captain Sandon McCoy had just 5 carries for 17 yards, but he had 2 touchdowns, and notably, he’s the guy that came in and got the team settled after those two fumbles put the Black Knights down 14-0.  That was huge.

As has been the case at times all season, Army struggled to reliably get the ball to their playmakers in space.  However, the slotbacks made the most of what few opportunities they got.  Tyrell Robinson put up 7 carries for 32 yards, Braheam Murphy had 2 for 17 and a crucial touchdown on 3rd-and-long, and Brandon Walters and A.J. Howard both chipped in a carry for 9 and 8 yards, respectively. In every case, those outside chunk runs came at critical moments.

Army also struggled at times on defense.  As they have at times all season, they gave up a few deep shots, and — alarmingly — they gave up 5.5 yards/carry on the ground.  However, they held Georgia Southern to just 4/9 on 3rd down and to 175 yards rushing overall, and that’s not bad against a triple-option team.  They also forced a critical turnover on downs, blocked a punt, and picked off a key interception, so to be fair, they definitely had their moments.  In fact, if you’d told me before the game that Southern was gonna get all their offensive points off of deep shots from QB Shai Werts’s passing, I’d have signed up for that immediately.  In the end, the Eagles wound up with just 311 yards of total offense and 21:36 time of possession.  They got turnovers, yes, but even with those, it’s tough to win off of just giant explosive plays on offense, especially when you run the triple-option.  It’s somewhat fitting that arguably the most important play of the game was Army’s interception as time was running down.

WHAT. A. PLAY!@ArmyWP_Football blocks the punt and they are RIGHT BACK in this one! pic.twitter.com/UDmgb77sMd

Andre Carter making a play with the game on the line.#GoArmy pic.twitter.com/Ahvf9q0orM

I don’t know what to say about yesterday’s finish except that mistakes were made on every side.  Army should have run the clock out after the interception.  But also, the refs handed Southern 15 extra seconds off of a phantom penalty that stopped the clock and reset the game clock as time was running down.  And then, of course, Southern tried to run a quarterback draw with :17 seconds and wound up without enough time to attempt a long field goal.  If they get the first down in that spot, they not only have an easier kick, they also stop the clock to move the chains.  Time was of the essence, so that particular clock stoppage was key.  Southern’s kicker had already missed a chip shot field goal and had an extra point blocked, so the extra yardage in this spot was kind of important as well.

As it happens, Army made the tackle, and Southern wound up catching a tough break.  Argue about it all you want; the play was reviewed and upheld.

It is what it is.

It’s worth pointing out here that replay officials can’t watch plays in slow motion.  They can only rewatch plays in real-time, and they have only so much time to find clear and convincing evidence that the call on the field was incorrect.  It’s a tough break in this case, but the Eagles could have kicked a field goal straight away.  Instead, they tried to help their kicker, got smoked, and now have to own their part of that.  There’s also some obscure rules stuff here (see below), but bottom line, this isn’t swimming.  Tenths of a second don’t count.

The announcers of GA Southern game on TV did not bring this up in @GSAthletics_FB game maybe radio did but here’s why game was over even if there was just under a second to go https://t.co/uO1ZlhRMH0

• If you ever get the chance to work for Jeff Monken, do it.

• If you ever get the chance to play for Jeff Monken, do it.#GoArmy ???‍☠️pic.twitter.com/wgxk6Vs1qB

I have no idea whether or not the Air Force game will be rescheduled, but my sense is that it probably won’t be.  Certainly, the Black Knights aren’t looking to do the Zoomies any favors or let them use the pandemic to upstage the Army-Navy Game.

There’s been talk this week that Navy will play their two cancelled American Conference games over the course of the next two weeks.  As of last night, the American Conference put it on the schedule that way, so at least at some level, it’s official.  However, I’m telling you right now that I would not bet on that happening.  I guess we’ll see.

Army itself is now off for the next couple of weeks.  We then have Army-Navy at Michie Stadium for the first time since 1943.  I wish I could be there, but either way, I can hardly wait. 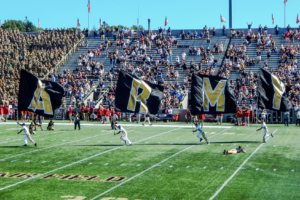 Pics from the Game: UConn & Miami-Ohio

As promised, here are my pictures from the past two[...] 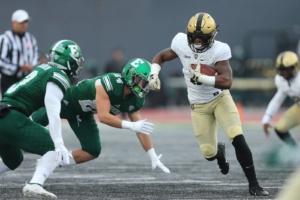 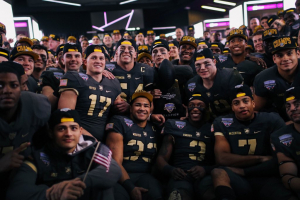