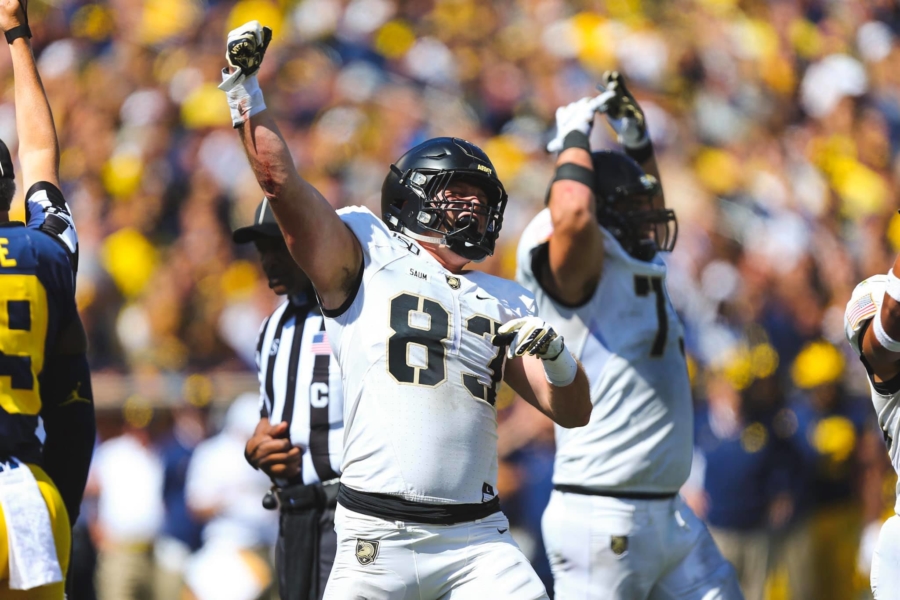 My blood pressure is still coming down from 150/90, but even more than that, I’m glad I don’t have laundry duty for the Michigan coaching staff.  Probably best to just throw those khakis away, my friends.

Overall, we are extremely proud of our Brave Old Army Team.  Danno said it right in his Game Recap, “Not because of some moral victory for playing the #7 team in the country tough, and certainly not because they had chances to win and didn’t, but rather, because they manifestly left it all on the field.”

These men expect to compete and win.  We, as a fan base, should not be surprised when they show up on a big stage and take a ranked team to overtime.  Nor should we be satisfied when they don’t finish.  Victory is the expectation and the standard.  Period.  With that said, we at AFF are immensely proud of the effort displayed on the field.  The Army Team showed up and held nothing back.

Give me a moment to step down from the pulpit and talk about what As For Football has going on this year.  We are giving away Army Navy Tickets, offering premium content now for Patreon Members, launching a new podcast that covers all of college football, and are running a new weekly NCAA video game series on YouTube.

The Slomka Push – AFF Play of the Week

Giving the Black Knights the lead going into Halftime, this play perfectly represents Army’s style.  It says “we’re not flashy or sexy; we’re going to grind you down and impose our will.”  Was it the turning point of the game?  Not quite.  It did, however, summarize Army’s attitude and effort going into the Big House.

The AFF Play of the Game: After a split vote, the “Slomka Push” is awarded play of the game!

You’ve enjoyed Cadet Casual! Now, you get to add the Honorary Recondo Badge to your Cadet uniforms!  You held a potent Michigan Offense to 340 yards and 24 points with 3 keys takeaways in a double overtime game!  That tough, gritty performance reminded us of the tough weeks grinding in the Buckner wilderness.  Let that shiny badge remind you of this outstanding effort.

However, much like this loss going forward, the Recondo badge counts for nothing when you commission.  Keep up the good work and there will be more and better fake awards to come!

Was anyone else frustrated with Gus Johnson’s and Joel Klatt’s ability to pronounce Army player’s names?  “Brent Tooth,” “Javhari Boudreau,” and “Artrice Hobbs?”  It was like they were speaking a foreign language.  They obviously did not perform their Graduation Rehearsal due diligence to phonetically spell out the key players’ names.

Thankfully, the Department of Foreign Language (DFI) has volunteered to provide additional instruction to these individuals who speak on the air for a living.  Report to Washington Hall after lunch on Monday.  With luck, this will prevent such sloppy announcing for the rest of the season.

Where is Ross Tucker when you need him?

We’re glad to have you back, and apparently so is Brent Davis!  You led the Army rushing attack with 29 carries for 93 yards, and you worked to get every single one.  With the midline rushing attack marked as the most crucial aspect of Army’s triple-option offense this week, we needed your legs and your aggressive mentality in prime condition. Forget about those penalties.  We need you frothing at the mouth and ready to hit the hole!

For that reason, we have granted you elevator privileges across post.  Go ahead!  Hop on the elevator in Washington Hall during class hours–and maybe grab a yuck headed up to the Dirt labs just to be nice.  We’re happy “Slomkamania” has started once again.

Dude, you look shook up!  You threw for 207 yards (65.5% completion rate) with a QBR of just 55.3.  It might of had something to do with the 2 lost fumbles and 4 sacks you took while trying to find an open man against Army’s secondary.

I’m going to be honest with you.  You’re going to play better teams than Army.

If Michigan wants to make it to the College Football Playoff, you need to bounce back.  Luckily, we have the perfect thing for you–Army mandated Master Resiliency Training!  There’s no better way to learn how to manage your emotions than sitting through a 2-day block of death by PowerPoint.  After this, your “Tennis ball” mentality will be able to handle anything the rest of the Big Ten will throw at you.  And if not, you probably just need more MRT.

What is it exactly?  Well, it’s similar to the toolkit your TAC always references when he or she offers unsolicited advice about your future Army career.  Plus, hammers and tools…  It just works so don’t scrutinize it too much.

Anyway, we’re excited to see you play this season!

Elijah Riley – Player of the Week

Obviously, you were the dude on defense this Saturday!  Leading the team with 13 total tackles (9 Solo/2 Sacks/2 TFL), you reinforced your position as team captain.  Moreover, strip sack was key.  It was arguably the critical play of the game, regaining momentum after an Army turnover.  Not to mention the tight coverage leading to Shea Patterson’s dismal stat line.

There were a few penalties that we’re sure you’d want back, but we understand that’s going to happen when playing tight defense against a talented team like Michigan.

Bottom line: you played out of your mind and we loved every second!

Referees – Goats of the Week

Gents, there were some bad calls over the course of this game on both sides.  Granted, we were happy that y’all had a bad angle on the scoop and score.  But retroactively calling targeting on a bang-bang play lacking intent is just bad.  I mean, y’all watch football for a living!  What was Bourdeau supposed to do?

Also, you guys could brush up on the difference between pass interference and defensive holding.  Without improvement, I foresee lots of heartache in the Big Ten.

I get the targeting call, but when bodies a flailing around you can’t call a targeting penalty. That’s not fair to the D. You can’t just change direction like that.

LB Cole Christiansen and S Jaylon McClinton earn entry into the O-Club.  Again, the physicality and toughness you bring to this defense is undeniable.  You guys are leaders in every sense.

Jaylon, rest up this week.  We need you healthy!  That 4th-Down stop was clutch!

Cole Talley is allowed in, too.  Not to drink, of course, but just to rebuild his confidence.  It was a 50-yarder in the Big House as your first field goal attempt in college football.  No body blames you, Cole!  We still believe you are the right man for the job this season.

That’s it for superlatives!

We’ll provide more reaction and analysis from the game this week as well as a UTSA preview on the Army Football Show (via Stitcher, Spotify, or iTunes) this Thursday.  The Night Before the Night Before! 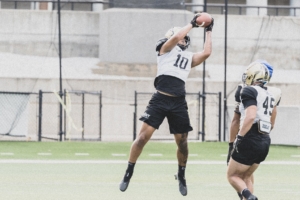 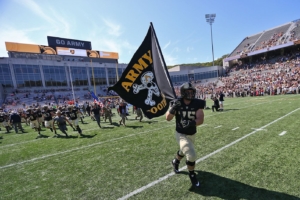 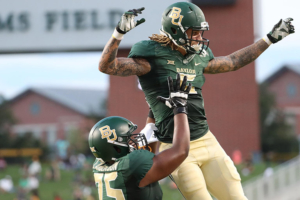